A Meal for Two in Under 15 minutes! 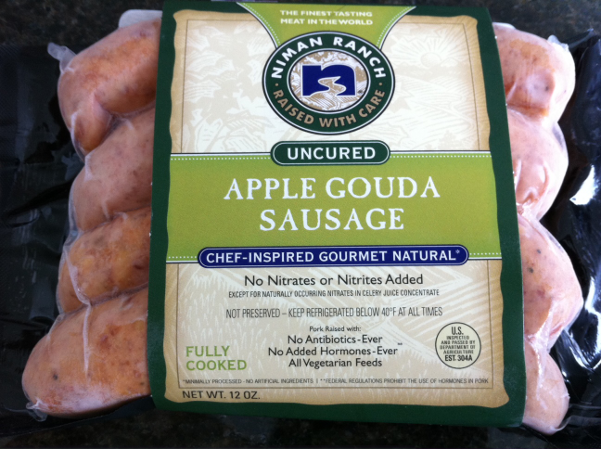 Sausages are a low-carber’s dear old friends. They’re loyal, simple, down-to-earth and always ready to provide you with a delicious and healthy meal. My favorite sausages are these Apple Gouda ones from Niman Ranch. I know all Americans think that apple goes best with cinnamon, but really it’s apple and gouda that should win the best combo prize! And not only are they tasty, but they’re also healthy (no antibiotics, hormones and your pigs aren’t getting fed other pigs!). There’s a bit of sugar (probably from the apples), but unless you’re having 20 of these sausages a day, you’ll be well within the carb limit for most low carb diets.

Wholefoods sells these sausages and various other Niman Ranch sausages for around $6.99 per pack. This may seem pricey, but honestly, I can’t eat more than 2 sausages per meal (and my boyfriend has trouble eating more than 3 per meal). So, one pack of these sausages with some vegetables would make a meal for 2 (which is seriously cheap for New York City). I pick up 3 or 4 packs of these every time I go to Wholefoods, which is about once a week, because Wholefoods sometimes runs out of this flavor. Although Wholefoods sells the sausages in the refrigerated section, I actually put them into my freezer as soon as I get home. They keep for a long time and are easy to thaw out (although you do end up having to cook all 4 sausages in the pack since you can’t thaw them out individually). 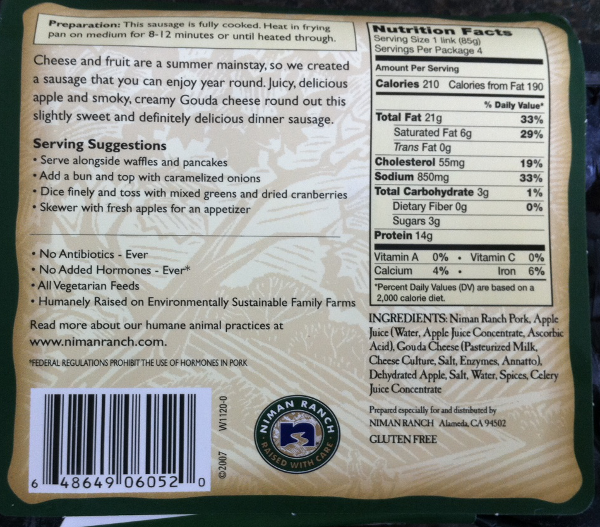 The cooking instructions on the back of the pack suggest heating in a frying pan, but there are other options obviously. If you have a grill, then that method is great. If you’re lazy, then try just putting it in the microwave (I’ve definitely done that before, and since the sausages are pre-cooked, you don’t have to worry about making sure you don’t get food poisoning from under-cooking them). Unfortunately, I don’t have a grill (a distinct disadvantage of living in NYC), but I still like that charred taste to my sausages, which microwave cooking doesn’t provide. Solution – the broiler (it’s part of most ovens).

“you can have them with some cauliflower mash to create your own version of the British bangers and mash!”

So, after I take the frozen sausages out of the packaging, I put them on a plate and defrost them in the microwave for three and a half minutes so that they’re not frozen rock solid anymore but are still cool to the touch. I then put them onto a sheet of aluminum (I spelled it the American way!) foil on the top rack of the oven and switch on the broiler. If your broiler has a high/low setting, then put it on high. Broil them for 8 minutes but flip them over after every 2 minutes. It takes a bit of effort having to flip them over four times, but the results are worth it. Total cooking time with defrosting is still only 12 minutes (since there’s no preparation required), which makes this a speedy meal to prepare. You can pair the sausages with some sauerkraut, which Wholefoods also sells, for a German meal, or you can have them with some cauliflower mash (faux mashed potatoes) to create your own version of the British bangers and mash! 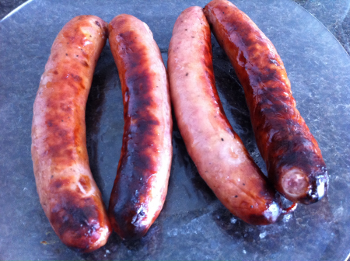