It’s day 6, and I still haven’t caved in, although I hit a bit of a rocky patch on Tuesday and had to consume 3 Atkins bars in order to keep going! So what have I been eating? Well, it’s been a bit easier since starting back at work on Monday since my office has a cafeteria, although you can get what I’ve been eating for breakfast and lunch in most cities!

For breakfast, I devour 3 fried eggs with some bacon (I’m usually starving by the time I get to work). I’m rather bored by just eggs alone so the bacon helps to add some flavor to things. Omelets and scrambled eggs can make for a bit of a variation. Or if you’re super lazy, you can boil a dozen eggs in one go, peel them and store them in the fridge. Then have 2 or 3 each morning for breakfast. I quite like the taste of caesar salad dressing so you could cut up your eggs with a fork and mix it with some of that for a bit more flavor and less dryness. Also, some soy sauces (or liquid aminos) have 0 carbs (or very small amounts) and can add great flavor to eggs cooked any way! Soy sauce gets mixed responses from Atkins dieters because its ingredient list contains wheat, which is not allowed on the diet. As an alternative to soy sauce, you can try Liquid Aminos, which are made from soybeans and water. Bragg (one manufacturer of liquid aminos) claims that each 1/2 teaspoon contains 0.1g of carbs. 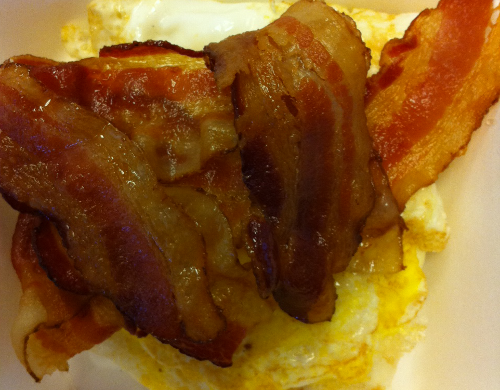 For lunch, I’ve gotten salads several times. I put in some boiled eggs (cut up), some tuna, some onions, and some spinach. I’ve also thrown some olives in a few times. I usually also get a fillet of salmon freshly grilled. I then shred the salmon meat and stick it into my salad. Then everything is tossed with 3 tablespoons of caesar dressing (I say “tossed” but really I just put everything into the box they supply in my cafeteria and shake vigorous!). Several other salad dressings are permitted on the Atkins induction diet including, blue cheese, italian, lemon juice, oil and vinegar, and ranch, although caesar contains by far the least amount of carbs per serving, which means more spare carbs to consume elsewhere during the day! Of course, you don’t have to do salads! I got a grilled hanger steak one day and had it with some veggies. Grilled fish is also good as long as there’s no sauce on it. I often also get some chicken broth to have as a soup – I just skim the liquid off the top of a chicken noodle soup. 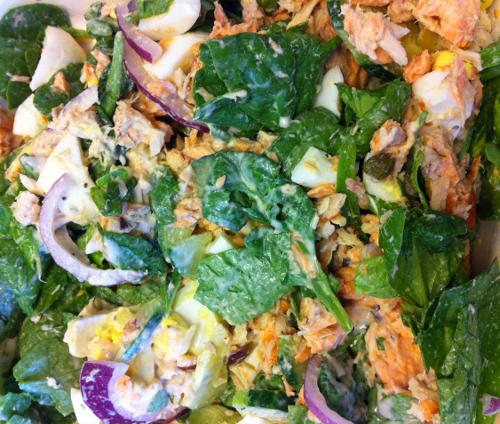 So far, this gets me to around 2pm. I can make it most days to around 3pm or 4pm just on the above described breakfast and lunch. However, once that afternoon slump hits, it’s deathly! To get water from the pantry, I have to walk past the vending machine and these chocolate covered almond machines! I can usually make it past the vending machines without incident, but those almonds! They’re just sitting in this glass bowl, and my eyes just stray over to them as I turn the corner out of the pantry. Last time I went to get water, I nearly walked into the wall because my legs kept moving whereas my eyes remained fixed on that delicious sweet sensation! Sigh. That’s when I turn to the Atkins bars. Everyone (except perhaps Atkins) claims that you get the best results if you stay away from the bars. Some people on the diet are purists and want to stay away from anything that might be controversial, including diet sodas, soy sauce, and Atkins bars. I, however, cannot do it. In fact, I was so enamored with those bars that I bought a whole 12-pack of them from Amazon! I really like the Marshmallow Mudslide flavor although the Chocolate Chip Granola Barcomes a close second. There’s a Cookies N Creme bar that’s coming soon, and if I were planning to continue this diet for a while, then I would definitely be eagerly awaiting their release! Of course, there are other snacks, for example, cheese. I bought the Robusto aged gouda from Wholefoods and cut it up into 1 oz pieces (approximately 2 inches by 0.5 inches by 0.5 inches) and individually wrapped them. Then you can take a few pieces into work as a snack. (I had 2 of those pieces as an after dinner snack tonight.)

Dinner…this always perplexes me. I don’t really want to spend ages cooking when I get off work so I usually cobble together a smattering of different dishes that I’ve cooked during the weekend or on a less tiring night. The dishes include salmon salad, egg salad, tuna salad, slow cooker pork belly, slow cooker chicken, and whatever else I can think off that’ll keep in the fridge for a few days (there’s currently a nice slab of beef brisket cooking in my slower cooker). It’s quick, and it gives me some variation – at the very least, my plate looks very colorful! 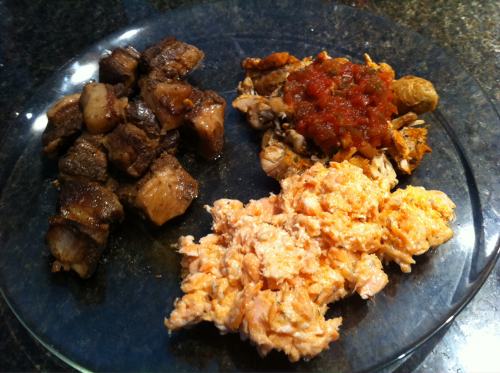 What do I think so far of the diet? It’s painful! But, because I really don’t have hardly any sugar highs, I never really feel that awful crushing crash when you go off the sugar high. Then, of course there’s the issue of no alcohol. I’m 50/50 on this at the moment – I hate not being able to drink anything except water and soda water at a bar, but yet I’m grateful the next morning when I’m not waking up to a dry mouth and a pounding head! However, I feel that several “celebratory” drinks will be waiting at the end of the next 8 days…