Baking Soda Vs. Baking Powder–Is There a Difference? 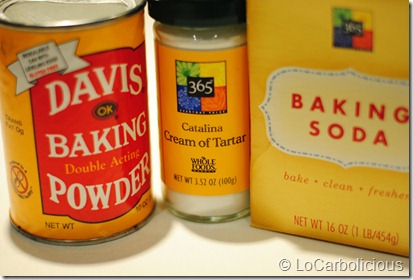 If you’ve ever baked normal (full of carbs) cookies, cakes, or breads, then you have probably used baking soda or baking powder.  You might also have come across cream of tartar perhaps.  These are all common ingredients that you can find in the baking section of most grocery stores.  For a long time, I thought baking soda and baking powder were the same thing and could be used interchangeably.  I don’t really know why I thought such a thing – but it does explain why I wasn’t particularly good at baking before!

What is Baking Powder?  This is usually a combination of baking soda with an acidic agent (such as cream of tartar, which is described below) along with some other ingredients, such as cornstarch.  Baking powder produces carbon dioxide bubbles, which expand in the oven (due to the heat) so that your baked goods will rise and become light and soft.   Baking powder can come in two versions:  single-acting and double-acting.  Single-acting means that as soon as you add the powder to anything wet, it’ll start giving off carbon dioxide bubbles, so you’ll need to put your mixture into the oven quickly to avoid running out of bubbles.  Double-acting means that although some of the bubbles are released when you first add the powder to your mixture, most of the bubbles will come out when the mixture heats up in the oven.  Therefore, you don’t have to worry about leaving your mixture out for too long when it comes to double-acting powder.

Why is Baking Powder Problematic on a Low Carb Diet?  Many low carb diets discourage cornstarch or any other type of starch, but this is unfortunately an ingredient in most brands of baking powder.  The starch doesn’t actually add much to the cooking, but it does stop the baking powder from getting moist and clumping together.  So, while the baking powder states that it contains less than 1g of carb, you should remember that its serving size is 1/8 of a teaspoon and most recipes call for at least a teaspoon or more (there are 2g of carbs per teaspoon of baking powder).  If you’re not super strict on your low carb diet, then a teaspoon of baking powder is not going to be a problem.  However, if you’re really counting every carb, then you can make your own starch-free low carb baking powder by using cream of tartar and baking soda combined.  A simple recipe for making baking powder is below, but first let me briefly explain what baking soda and cream of tartar are.

What is Baking Soda? It’s 100% sodium bicarbonate, which reacts with anything acidic in your baking mixture to produce carbon dioxide bubbles.  These bubbles will start forming as soon as the baking soda touches the acidic ingredients, so you need to bake your mixture fast (otherwise, the bubbles will die out).

What is cream of tartar?  This is a white powder (potassium hydrogen tartrate) that is an acidic salt.  It’s occurs naturally as one of the by-products of wine-making.  It has many uses in foods, the most well-known of which is stabilizing beaten egg whites.  Other uses include giving icing and meringue a creamy texture (hence its name I assume) and reducing discoloration of vegetables when boiled.  For low carb dieters, it has another use.  When added to baking soda, it makes a carb-less baking powder that works just as well as normal baking powder!  There have been some health concerns about cream of tartar.  First, it is high in potassium, which can be problematic for people with kidney disease or taking medications that prevent the kidney from getting rid of the potassium effectively.  When taken in large amounts, cream of tartar can also be a laxative.  However, the amount used in normal cooking is generally not a problem.