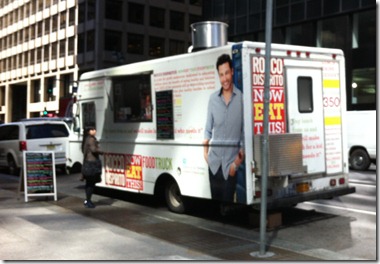 I walked out of the subway this morning and found myself walking toward a food truck bearing the sign “healthy comfort food.”  I’m always intrigued by anyone claiming to sell “healthy” foods, but most of the time, their idea of “healthy” falls quite a bit below my standards!

However, I am happy to say,the Now Eat This food truck is not only tasty but also reasonably healthy.  That said, I do wish they would tell you the carb count along with the rest of the nutritional information.

MENU:  The primary aim of their menu appears to be low calorie food with an emphasis on gluten free and sugar free.  For example, you can get gluten free meatballs with penne pasta (349 calories), faux fried General Tso’s chicken (310 calories), or a cheesy turkey black bean enchilada with low carb tortilla (302 calories).

In addition, they also have one low carb option, which I went for:  chicken & andouille jambalaya with no carb Shirataki rice (they do add black beans, which have carbs).  This dish is pictured below.  The meat was pretty decent quality and the sauce was tasty (with just a bit of spice).  I was a bit worried about the Shirataki rice, but it actually tasted pretty good and soaked up the flavors well. 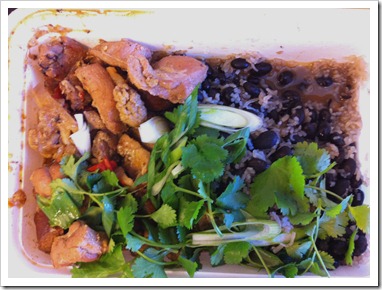 DRINKS:  They sell only zero-calorie drinks, including iced tea, Zevia, and other calorie-free sodas.

THE STORY:  The food truck was started by celebrity chef Rocco DiSpirito (and I assume that’s his picture plastered across the truck).  They also sell his cook book at the truck!  Although this sounds like a blatant promotion for Rocco, I do appreciate the fact that 100% of the proceeds from the sales at the food truck go toward educating New York City schoolchildren about how to cook and what is healthy to eat.

WHERE TO FIND IT?  If you’re in NYC, then the best way to find it is via facebook or twitter as the truck moves around from day to day.  I found it today at 52nd and Lex.  They are also now on Seamless, although I’m not positive what delivery radius they have. 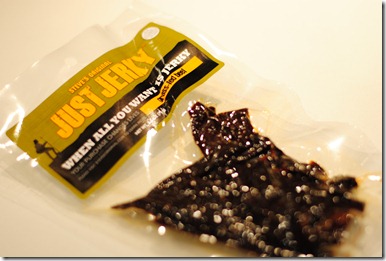 When I first heard about Walden Farm’s calorie-free salad dressings, my reaction was immediately…is that possible??  Previously, I had thought the only possible low-carb low-calorie options were salt and red wine vinegar (balsamic vinegar has sugar in it).  However, after trying their calorie-free syrup (pretty decent) with my coconut flour pancakes and their BBQ sauce with my pulled pork, I thought it’d give it a go with their range of salad dressings.

Walden Farm’s website lists a healthy selection of 20 different flavors, ranging from your common Caesar dressing to you more exotic Chipotle Ranch.  However, my local Food Emporium (you can search their website for where their sauces are sold or buy it online at stores like Amazon) only carried 4 different flavors (at $4.19 each).

If white paint were a salad dressing, then this is how it would look when poured out of the bottle: Unfortunately, the smell also resembled paint, with a tinge of ranch and a heck of a lot of vinegar.  It honestly made my stomach turn, and I wasn’t sure if I could eat it at all.  But I had a salad all lined up , which had come with a 220 calorie packet of Newman’s ranch dressing that was already in the trash.  I had to brave the smell – maybe the taste would be better?  I dipped a few leaves into the white liquid, held my breath, and placed the “food” into my mouth.  My first thought was “EWWWW” followed by it tastes like paint, followed by paint thinned with vinegar.  But, by the time I had finished chewing the mouthful, it did taste a bit like ranch and was almost edible.  I guess if you’re expecting a creamy ranch dressing, think again!  A better description would probably be ranch-flavored vinaigrette (if you’re trying to be nice).  I personally would never eat this again (and I hope you all appreciate what I went through to review this!), but perhaps the point that many Amazon reviewers make is worth bearing in mind here – it is zero calories….you obviously can’t expect it to taste like actual ranch salad dressing.  With that thought in mind, I moved onto the Honey Dijon flavor.

Whereas the ranch dressing was thin and liquidy, this one was actually pretty thick.  It was a promising start – at least it looked like honey mustard dressing!  Then I smelled it.  Oh dear.  I felt my stomach churn.  It smelled like honey mustard flavored rubber.  The rubber smell was quite overwhelming, and again, I didn’t want to put the food into my mouth.  The taste was just as bad.  I know that I taste food pretty strongly (I can often detect flavors and smells that other people miss), but this has to be obvious to everyone, right?  Reading the Amazon reviews of all the people who simply “love” this product shocks me!  I think I have to agree with the person who titled their review “Yuck.”

An hour later, I wanted to give the salad dressing a second chance, and I mixed a tiny amount in with some salad.  I thought that maybe if a small amount of the dressing was well dispersed throughout the salad, then it would taste a bit better.  Just the smell almost stopped me from ever getting close to that thing again!  But, I for the sake of this blog, I held my breath and put it into my mouth.  I am happy to admit that I was able to swallow the 2 pieces of leaves.  The dressing still tasted like rubber to me, but the taste wasn’t so strong due to the mixing.  But, at this point, I think I might just have the salad without any dressing.

As if I wasn’t already worried about trying my third bottle of Walden Farm’s salad dressing after my awful (almost-puking) experiences with the first two bottles, I then read a review of the Blue Cheese flavor, described in one review as tasting and smelling like “white glue.”  After trying the dressing, I can understand the “white glue” description.  It definitely looked like white glue, and I have to admit it did smell a bit like glue too!  However, this one seemed to taste more like the advertised flavor than the others.  I definitely tasted blue cheese flavor, the texture was nice and thick (if you can get rid of the white glue imagery), and it wasn’t as vinegary as the previous two.  The downside of course is that it still doesn’t taste like real dressing.  There’s some odd taste to all their dressings (petroleum?) that sadly just disgusts me.

I feel like I’ve pretty much run out of things to say about these salad dressings.  They all taste slightly different, but they all seem pretty inedible to me.  The Caesar flavored one smells kind of like actual Caesar dressing and looks like it, but doesn’t taste like it.  It has a salty glue taste (different to blue cheese flavor). I found this at a different Food Emporium, and so I thought I’d add it to the list.  This seemed to have received the most positive reviews on Amazon, and so I was almost eager to try it despite everything else! It smelled and looked like a raspberry vinaigrette (as opposed to paint or glue) – so kudos for that!  The taste was ok – I could still taste something slightly weird (again resembling petroleum or greasy oil) that they must put into all their dressings to make them calorie free, but the raspberry and vinegar tastes were also strong, which made it much better than the others.  So, overall, I would say that this was the best one, although the claim of being edible is barely anything to celebrate about considering that most vinaigrette dressings are very low in calories (often under 50 calories for 2 tablespoons and with very low carbs and fat).

If you’ve read what I’ve written above, then you’re probably not all that tempted.  However, I have to say that although I have been severely disappointed by these 5 salad dressings from Walden Farms, I do enjoy several of their other products (their pancake syrup and their BBQ sauce) and am very amazed by how they’re able to suck calories out of everything!