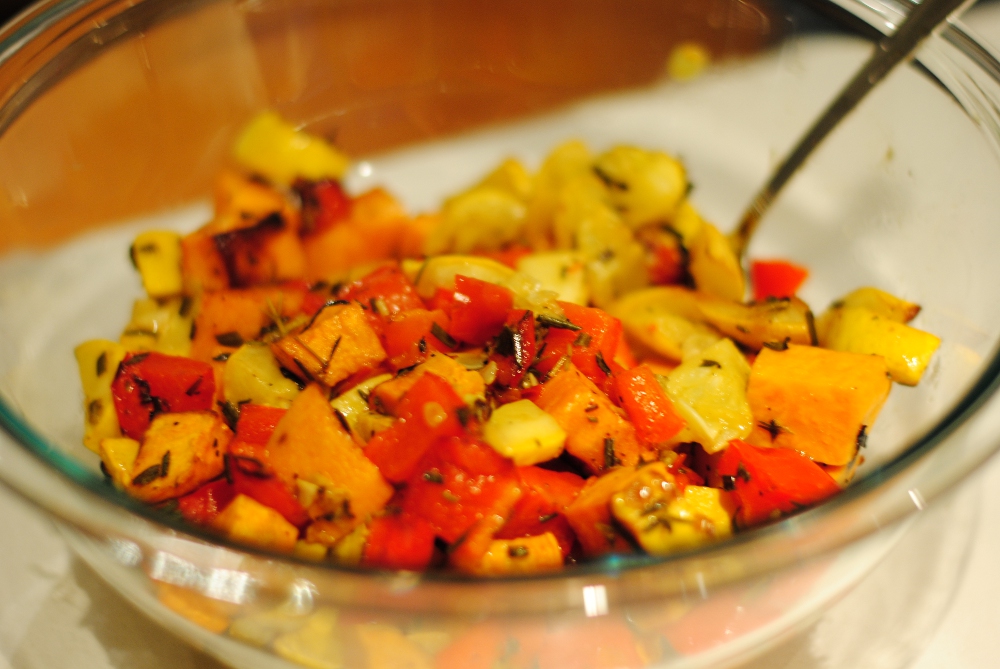 This is very healthy vegetable dish that tastes delicious and is easy to make. I modified it from a allrecipes.com recipe. You can change the sweet potato to an eggplant or some mushrooms if you want to lower the carbs. 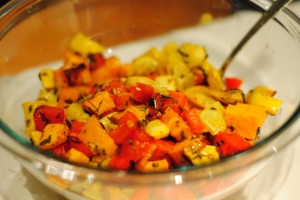 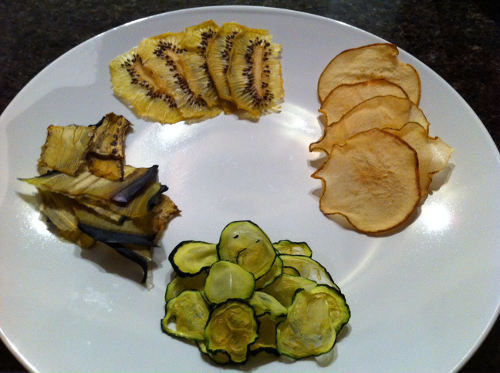 Dehydrator?? I recently bought a dehydrator, which just dries out various foods like fruits, vegetables, and even meats (think beef jerky). It’s a simple device – it basically blows hot air at your foods until they become dry. It’s reasonably cheap for a food device -mine cost $60 on Amazon. I got the Nesco FD-75PR 700-Watt Food Dehydrator, which comes with 5 trays to place food on and has a variety of temperatures for drying different foods. See the pictures below. 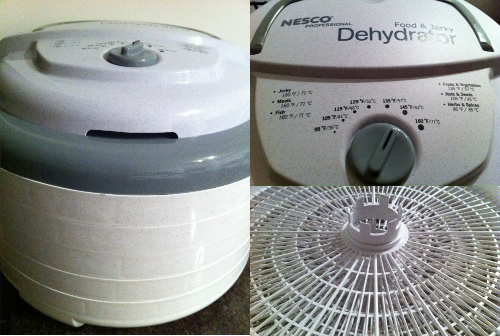 How to Dehydrate Foods? It’s so easy to dehydrate foods. For the veggies, I like to slice them into thin slices (around 1 millimeter thick) so that it doesn’t take too long for them to dry. I also like to salt them, which makes them taste better and helps to dry them faster (you can also try adding spices to them) – so boil some water and add a bunch of salt and dump the sliced veggies into the water for 1 minute. Fish them out quickly before they get too soggy. Then place the slices on the dehydrator. I dehydrated the zucchini and eggplant slices for around 9 hours – it’s a bit of a trial and error game because it was difficult to get the slices the same thickness, and the drying time really depends on how thick the slices are. For pears and kiwis, I cut them into thin, 1-2 millimeter slices. They took a little longer to dehydrate though (probably because they were thicker and didn’t have any salt on them). I put them in for 11 hours, and they came out pretty crispy but still a tad chewy and leathery (so it’s not going to break at the touch).

Why dehydrate fruits and vegetables when they taste perfectly good fresh? There are a variety of reasons for this! First, it allows the foods to stay fresh for much longer, so you can buy of box of apples (which is often cheaper than buying them a few a time – think Costco!) and eat those apples several months later. Then, there’s the variety – the dried fruits and veggies are a great snack that you can take with you anywhere in a small ziploc bag. Also, dehydrated fruits and veggies are “not cooked” so they count as raw food if you’re on the raw food diet. It’s super healthy and tasty. I’ve noticed these kale chips in Wholefoods recently. They cost a fortune (they’re not trying to rip you off – it really just cost a lot to produce them!), but you can make your own by buying some kale, salting it, and dehydrating it! 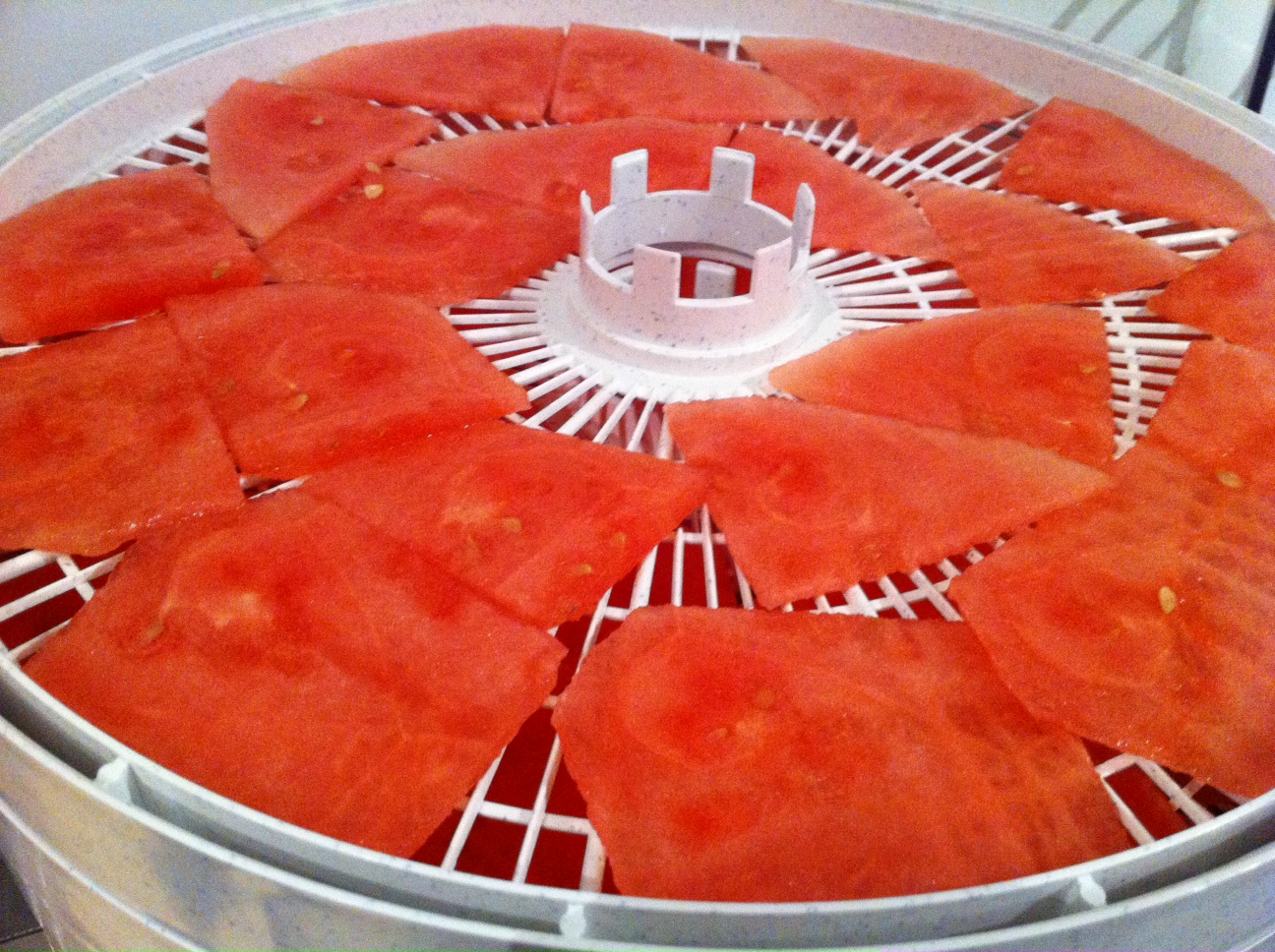 Watermelon sliced thin in the dehydrator (before dehydrating). 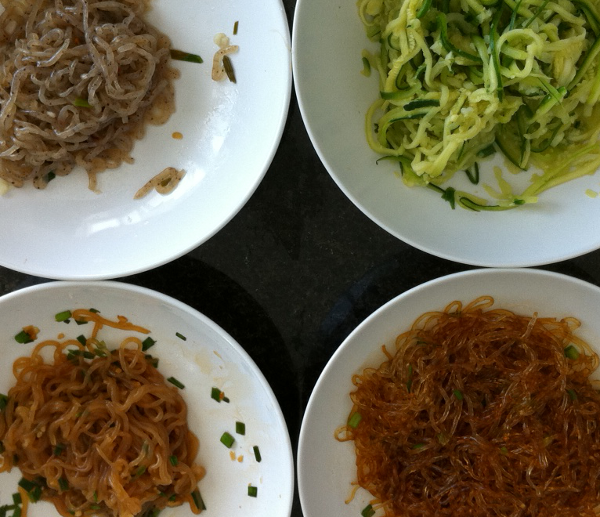 It’s hard living without noodles and pasta, especially when instant ramen noodles and quick pasta dishes played such an important part of my college life! Here’s 4 noodles/pasta you can eat on a low carb diet – they all have practically no calories and no carbs (the 3rd and 4th noodles are different variations of each other)!

1. Zucchini Noodles Start with 3 zucchinis and a Julienne peeler (kinda like a potato peeler but it cuts everything into thin strands at the same time). Cut each zucchini in half lengthwise, place the flat side down onto your chopping board and start peeling away with the Julienne peeler. It’s easy to use – just pull down like in the photo. You end up with strands of zucchini noodles ready to cook. 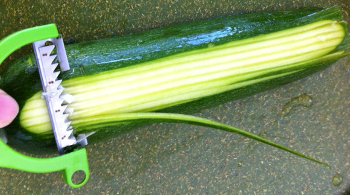 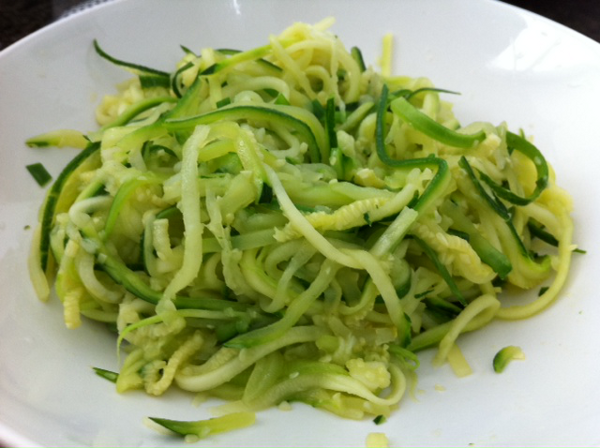 2. Kelp Noodles I picked up this packet of kelp noodles for $2.49 from my local Korean supermarket (H-Mart on 32nd St., New York). Kelps are large seaweeds according to Wikipedia – they’re fat-free, gluten-free, low-calorie (55 cals per 12oz pack, which can serve 2 people) and 0 net carbs (11g of fiber). 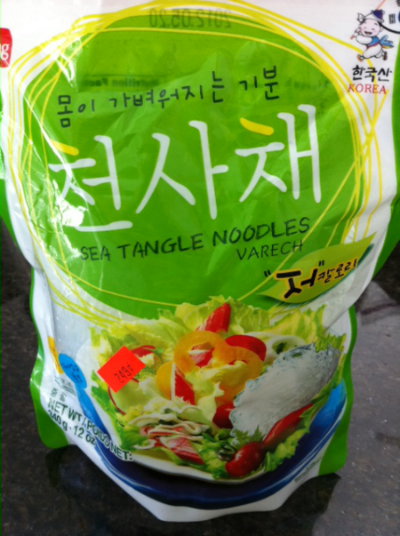 The noodles are edible straight from the packet, but are rather crunchy and have no flavor. I washed the noodles in cold water and then squeezed out the excess water. I then added some soy sauce, sesame oil, garlic, and chives, and then mixed it all together in a bowl. I put the bowl into the microwave for 30 seconds on high and poured out any excess liquids afterwards. The noodles were still rather crunchy, but not bad. 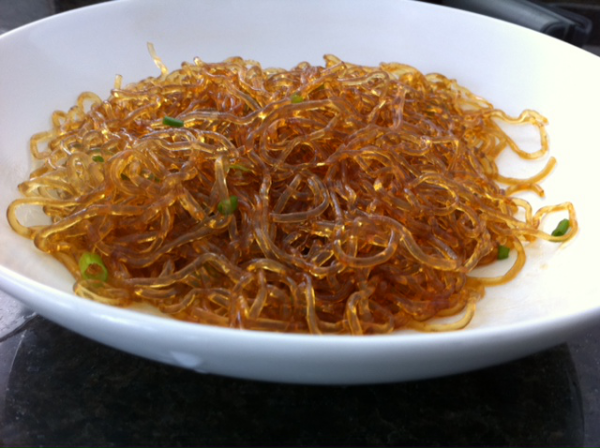 3. Shirataki Noodles (White) I tried these noodles a while ago as Wholefoods sold them and they had gotten a lot of press as a diet food. They’re made from the root of a type of asian yam (sometimes called konjac or elephant yam), but unlike the yams that we’re used to which contain a lot of net carbs, these so called “yam” plants have pretty much all fiber. Each 1 oz packet contains less than 1g of net carbs and 0 calories. The packet pictured below are white Shirataki Noodles (also called Yam Noodles) that contain no tofu or soy. Some manufacturers make a tofu Shirataki noodle, which as you might have guessed contains tofu. Supposedly, the tofu makes the noodles less rubbery, but it also adds some carbs to the noodles. 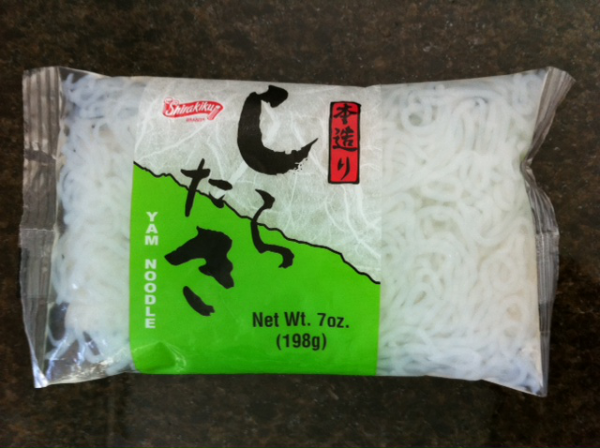 How to cook them? Take them out of the packet and wash them with cold water 3 times. I find the noodles to smell a bit fishy (literally), and so I like to rinse them well. Then place the noodles into the microwave and cook on high for 30 seconds – this helps to get rid of the fishy smell and makes them less rubbery. Rinse again in cold water. Add in soy sauce, sesame oil, garlic, and chives and mix together. Cook again in the microwave on high for 20 seconds. Drain the excess liquid and serve. 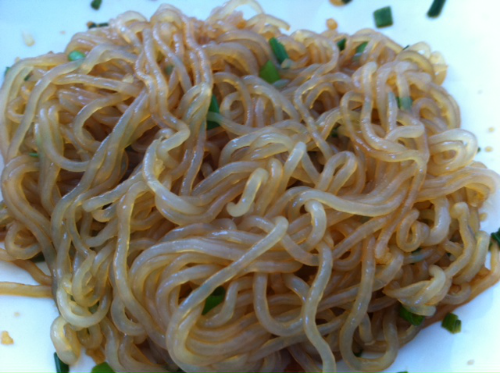 4. Shirataki Noodles (Brown) These are basically the same as the white shirataki noodles except they have some seaweed food-coloring in them! They taste pretty much the same too and have the same nutritional values – it just adds a bit of variety to our meals. 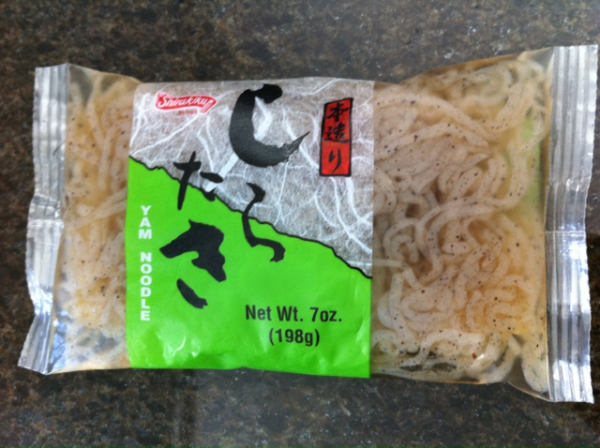 More recipes on how to make delicious low-carb meals with these noodles will follow.

Need some mash to go with those bangers? I found this great recipe for mashed cauliflower on foodnetwork.com and then modified it a touch to make it more buttery. 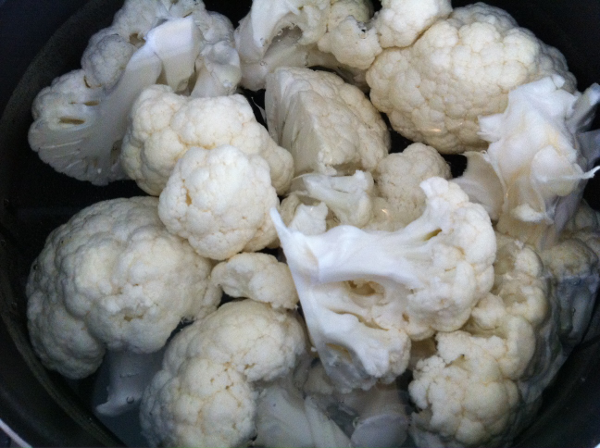 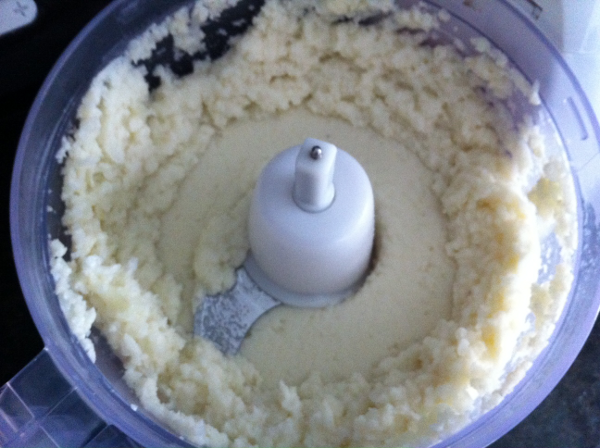 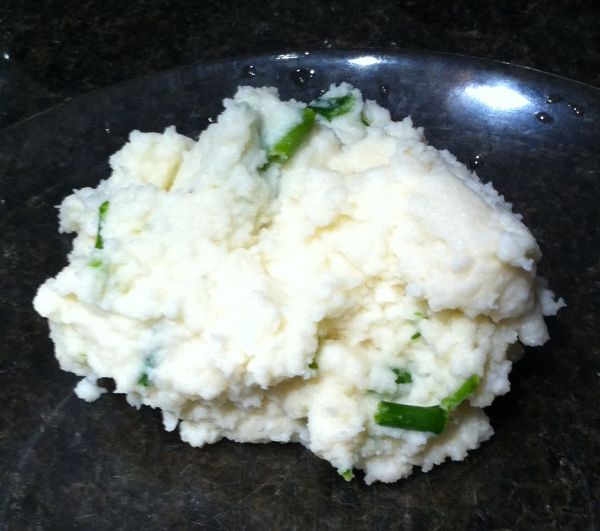 I was very skeptical when I first read about faux fried rice on nomnompaleo, which is a really interesting paleo blog, but it actually tastes amazing and very close to rice. The basis of the recipe is cauliflower chopped up in a food processor to simulate a fake rice look and texture. Personally, I think a more accurate description would be faux cous cous because the cauliflower bits you’re left with are very small. You can add pretty much anything (or nothing) to the chopped cauliflower for your dish (so it can be as simple or as complicated as you want). Below are some recipes I’ve come up with (modifying the basic idea that I got from Nomnompaleo). The first recipe is just a basic faux white rice, and the second is a Chinese fried rice (there’s a Thai version too). Countless other variations are possible! 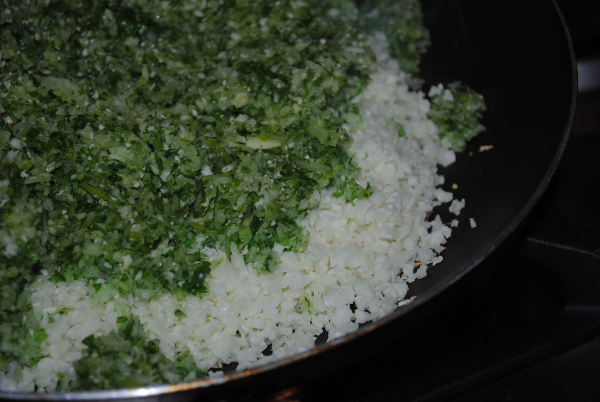 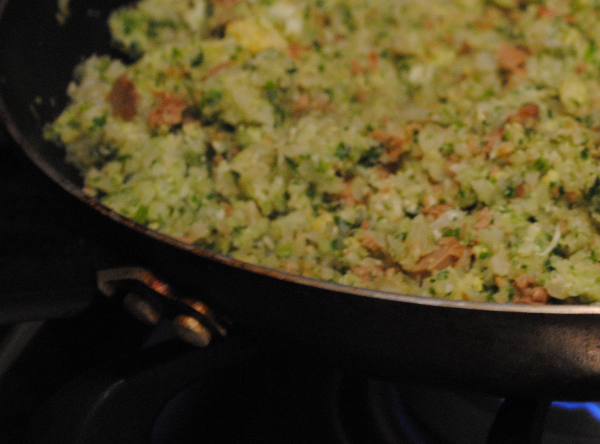 Veggie in the Belly

Although I don’t have a strong aversion to vegetables, I’m also not one of those people who can just magically chomp down vegetables like a rabbit. My way of getting all those healthy raw vegetables is to make it into a shake! It’s so simple. I stick everything you see on that plate, a few ice-cubes, and a touch of water or iced tea all into the blender and hit blend. Voila! 10 seconds later, I have a perfectly green and delicious shake. The exact recipe follows after the picture. 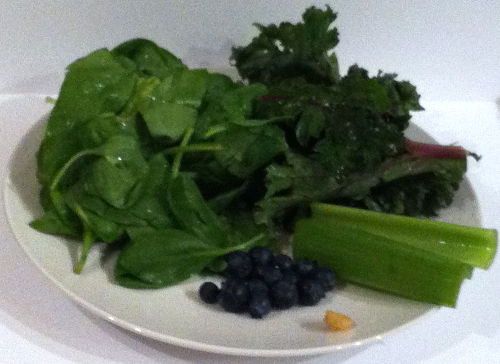 Place all the ingredients into the blender and blend well. You might have to gently shake the blender a bit for the veggies to shift down and become blended. Alternatively, stop the blender and push the remaining veggies down with a spoon. You can also add in a scoop of protein powder for an extra nutritious shake.

I know the shake doesn’t look all that appetizing because it’s green, but honestly, what did you expect? I did add in a bunch of green vegetables!