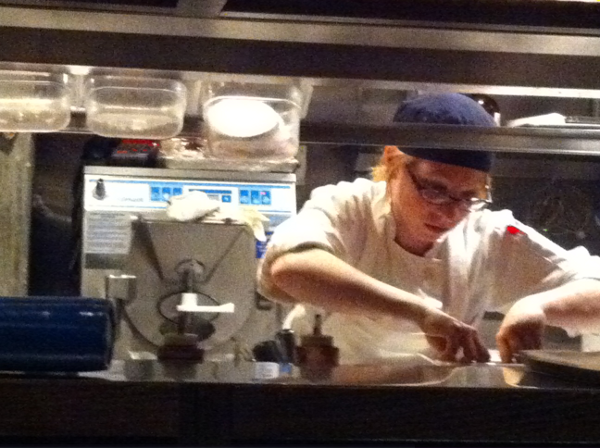 “DBGB is a loud bustling conconction of youth and movement”

DBGB Kitchen and Bar is another one of Daniel Boulud’s many New York creations. But whereas many of his other restaurants in new york bear that quiet undisturbed air of upscale sophistication usually enjoyed by the older generation, DBGB is a loud bustling conconction of youth and movement. The common restaurant-speak description of DBGB is gastropub, and if you’re unclear exactly what that term means, you need only visit DBGB to find out: great food at affordable (non-Daniel) prices paired with a large selection of beers rather than wines.

“A whole page of the menu is dedicated to sausages.”

Last night wasn’t my first time at DBGB, and I’m sure it won’t be my last. The menu looks like it was plucked from a diner and then revamped with high-end goodies traversing the breadth of Europe. In fact, you could do a nice food tour from the comfort of your DBGB chair. A whole page of the menu is dedicated to sausages, the deliciously low-carb food enjoyed by Germans and Brits. But if bangers and wurst aren’t your thing, a variety of other sausages with flavors from Thailand, Italy, Tunisia, and Spain are also offered. The appetizer section is stuffed with other low carb delicacies (e.g., salads, steak tartare, tuna crudo). More adventurous appetizers are also listed: veal tongue, beef bone marrow, tripe, pigs feet, and a variety of cold cuts ranging from ham hock to pigs head terrine (unfortunately, low carb dieters will have to bear the anguish of abstaining from the breads that come with these dishes). 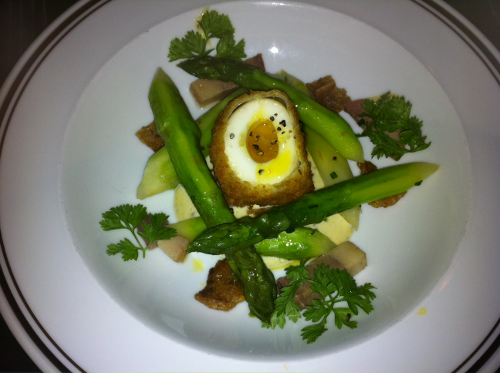 I started with the extremely safe, but clean and fulfilling asparagus and fried egg. The only non-low carb part of the dish was the breading around the egg, which is very easily removed and does not constitute much of the dish. The egg-mustard sits at the bottom of the dish and adds a light smattering of flavor to the egg and asparagus. It’s not overpowering, and it’s not too heavy. 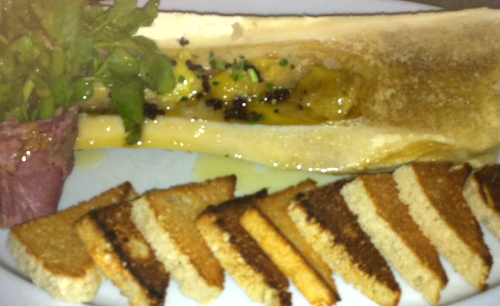 If you’re more daring, the beef bone marrow appetizer is a great teaser to start your meal. It’s not a large dish if you’re avoiding the little toasts that accompany the bone marrow, but it’s a great place to try this plentiful and nutritious but yet uncommon dish. 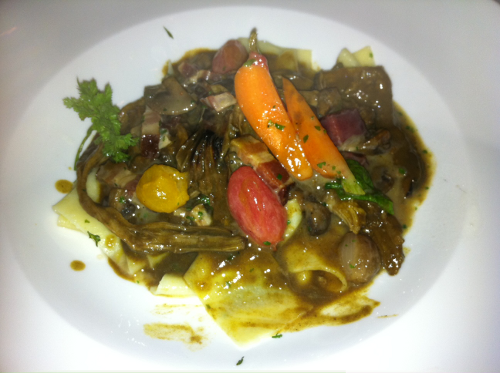 There is also a large selection of main dishes that you can eat on a low carb diet. The mussels, cod, salmon, steak, chicken, and lamb dishes would all satisfy your hunger. Moreover, you can have sausages as a main course as well. I chose the House-made Papardelle “Bourguignon,” which may strike you as an odd choice for a low carb meal, but it actually comes with a large helping of slow-cooked brisket on top of the pasta. Although it is highly tempting to eat the brisket and sauce with the pasta, you can definitely make a meal of just the meat (the portion size is sufficiently large, but if you’re really hungry, the steak might be a better choice). I have to admit, I definitely had some of the soft folds of egg-rich pasta – it was simply too irresistable! (This diet is difficult for me!) 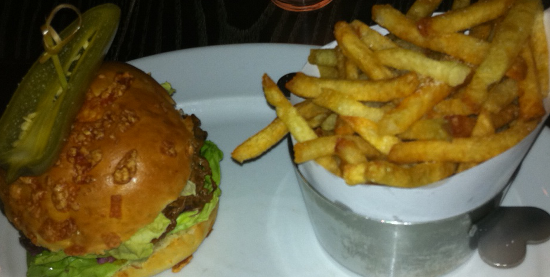 The last part of the menu deals with the burgers, and as you peruse down the list, they simply become more and more extravagant. The menu starts with the normal “plain” burger. Then there’s the Piggie (which has a healthy helping of Daisy May’s bbq pulled pork – I know there’s some sugar in that bbq sauce). Then comes the Frenchie (which has a confit of pork belly). And lastly, there’s the Menage a Trois (all 3 burgers). I’m sure I don’t need to tell the experienced low carb dieters how to eat a burger, but for those of you that are wondering, you just take off the bun and enjoy your low carb burger/meat pattie! It’s not an ideal situation, but there are plenty of other low carb options at DBGB. You won’t go away hungry, and for a New York restaurant by a top notch chef with a 3 Michelin star restaurant (4 New York Times stars), the prices are really quite reasonable! 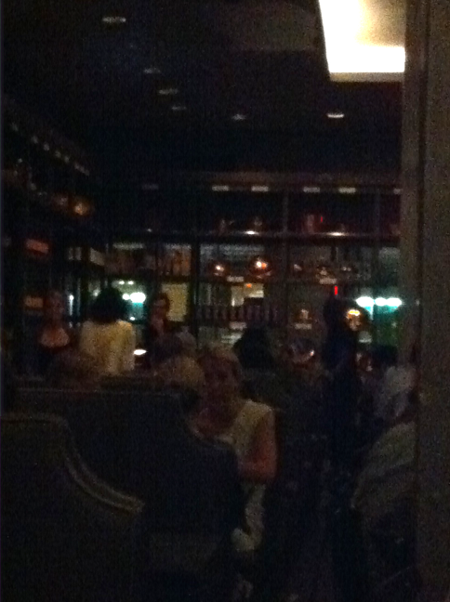