Update:  I got tired of the No Low Carb Cereal situation I originally wrote this post about and created my own Low Carb, No Grains/Gluten, No-Added Sugar Breakfast Cereal (it’s 100% all-natural and is called Breakfast Bites)!  It looks like breakfast cereal, tastes like breakfast cereal, but is Low Carb (3g net carbs per serving).  You can get it at Louise’s Foods.  So now I can’t complain about the lack of low carb cereal at breakfast anymore 🙂

Why can’t I eat a nice bowl of low carb cereal for breakfast instead of these eggs and bacon? I’m always in a rush in the mornings, so breakfast options are low. I’m not even a huge fan of corn flakes or anything, but after a while, some low carb cereal sounds delicious. Some crunchy flakes covered with fresh cold milk. Yum! So what options are there in terms of cereal? A quick internet search yields some disappointing and some interesting options.

First there’s Hi-Lo cereal. Although it’s marketed as a low carb cereal, it fails in many aspects to convince me that I should even give it a try! First, there’s the ingredient’s list – soy, wheat gluten, corn and rice flour – not a great combination when many low carb diets recommend no grains! Then there’s their net carb count – 7g per 1/2 cup serving, and I’m betting a 1/2 cup serving would not be sufficient for me to starve off the hunger until lunch. Having said all that, it is still lower than other cereals. For example, corn flakes (plain) contains approximately 12g of carbs per 1/2 cup, so it’s definitely an improvement. Some consumers on Amazon seem to really like their Maple Pecan flavor, although others seem to think it’s a bit “bland” and tastes like “cardboard.” Regardless, it’s not on my list! 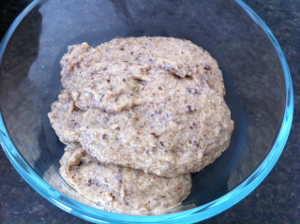 Then there’s a variety of low carb hot cereals, mostly made from flax. Flax seeds are highly nutritious with lots of omega-3 fatty acids and a ton of fiber. If you grind up the flax seeds (in a coffee grinder or a blender with no water), then it forms a flour, which when mixed with water forms an oatmeal-like consistency. Here’s a simple recipe (from about.com) for a hot nutty oatmeal-like cereal that you can make at home.

I made the pictured bowl of low carb cereal by using coconut peanut butter, no cinnamon and 3 drops of liquid sucralose. It tasted ok, not completely like oatmeal though. I think the best description for the consistency is oatmeal with a tablespoon of oil coating it. It’s just a bit gluey!

I’ll let you know when I make this!