Low carb desserts are definitely the weak link in the locarbolicious diet! And, unfortunately, my search for an edible low carb ice-cream has so far lead me nowhere. In fact, it’s really a disgrace to call the frozen foods that I’m going to describe below “ice-creams” because they bear so little resemblance in taste to them! If you don’t believe me, you’re welcome to go try them, but just remember that you’ve been warned! There’ll be a part 2 to this as I’ve got a few more ideas to try before giving up!

Arctic Zero: You know, they do such an amazing job of advertising their 150 calories per pint fake ice-cream, that I’ve actually been fooled twice into buying it! I somehow forgot just how awful it tasted after my first purchase (the mint chocolate cookie), and so when I saw it again in Wholefoods, I was fooled AGAIN (I bought the vanilla maple flavor that second time)! So, what is this Arctic Zero that’s able to fool me twice? It’s not ice-cream in any way (even though they call it an “ice-cream replacement”) – it has no milk or cream in the ingredients list. At best, it might be described as a bad sorbet perhaps. It’s true that their ingredients list looks pretty “natural,” but “natural” does not equal good tasting! On the contrary, their main ingredient is purified water (which, if you forgot, tastes like nothing). Their second most populous ingredient is whey protein concentrate, which also does not taste good (that’s why you have to flavor protein shakes so much!). Then comes a whole slew of sugars and flavorings, including organic cane sugar, chicory root, guar gum, xantham gum, natural flavors, sea salt, monk fruit concentrate. These are definitely not ingredients for the low carb purists! Ok, enough about the ingredients, the truth is I just care about whether it tastes good!

How does it taste? Because most of the pint is just frozen water, it doesn’t have the creaminess of ice-cream. Instead, it’s closer to ice, which presents a slight challenge when you’re trying to scoop it out. You could of course wait for it to melt a bit, but then it turns into a slushy frozen fudge-like consistency, which tastes even worse. I prefer the taste when this so called “ice-cream” is frozen because I can at least pretend that it’s just flavored ice or something! The mint flavor smells ok – mint + chocolate. The taste though, was just a watery mess. It was kind of minty and kind of maybe chocolatety and vaguely sweet. The vanilla maple was even worse – maybe vanilla and maple just doesn’t work well together, I don’t know, but all I can say was yuck! 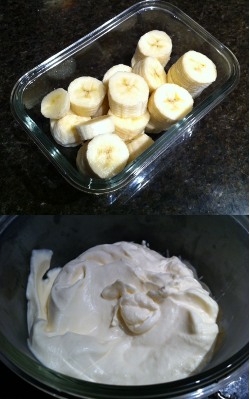 Bananas: You might have heard of this trick already, but after you put frozen bananas through the blender, they come out looking very much like creamy ice-cream. You can easily try this yourself by getting 2 bananas (you need enough bananas in the blender for it to have something to blend otherwise it doesn’t work) and chopping them up into half-inch chunks (as shown in the top picture). Place the chunks of bananas into the freezer overnight (it doesn’t work if the bananas are not well-frozen as I found out on my first attempt, which resulted in a disgusting gooey mess). Then place the frozen banana chunks into the blender and blend well for a few minutes – at first it looks like it’s just chopping the frozen bananas into smaller frozen chunks, but after a while, you’ll see the “ice-cream” form (see photo).

How does it taste? Like bananas (surprised?). It’s kind of creamy, but it’s not really creamy like full fat dairy ice-cream and it has a gooey texture when it melts in your mouth (not surprising since that’s the texture of banana puree). So maybe if you really like banana-flavored, not-so-creamy ice-cream, then this might work! Oh, and it’s not really low-carb since bananas have a lot of carbs. One medium sized banana (7″ to 7-7/8″ long) has 27g carbs (3g fibre and 14g sugar!). So, not a great choice!

Ok, don’t despair just yet as there are a few other options for low carb ice-creams out there. I’m going to try and get my hands on a tub of the Carbsmart Breyers Ice-cream (their website claims that Food Emporium carries one of the Carbsmart ice-creams). And then there’s also the trial and errors of home-made ice-cream. Part 2 coming soon… If you’ve tried a low carb ice-cream, please comment below to let me know what you thought of it.